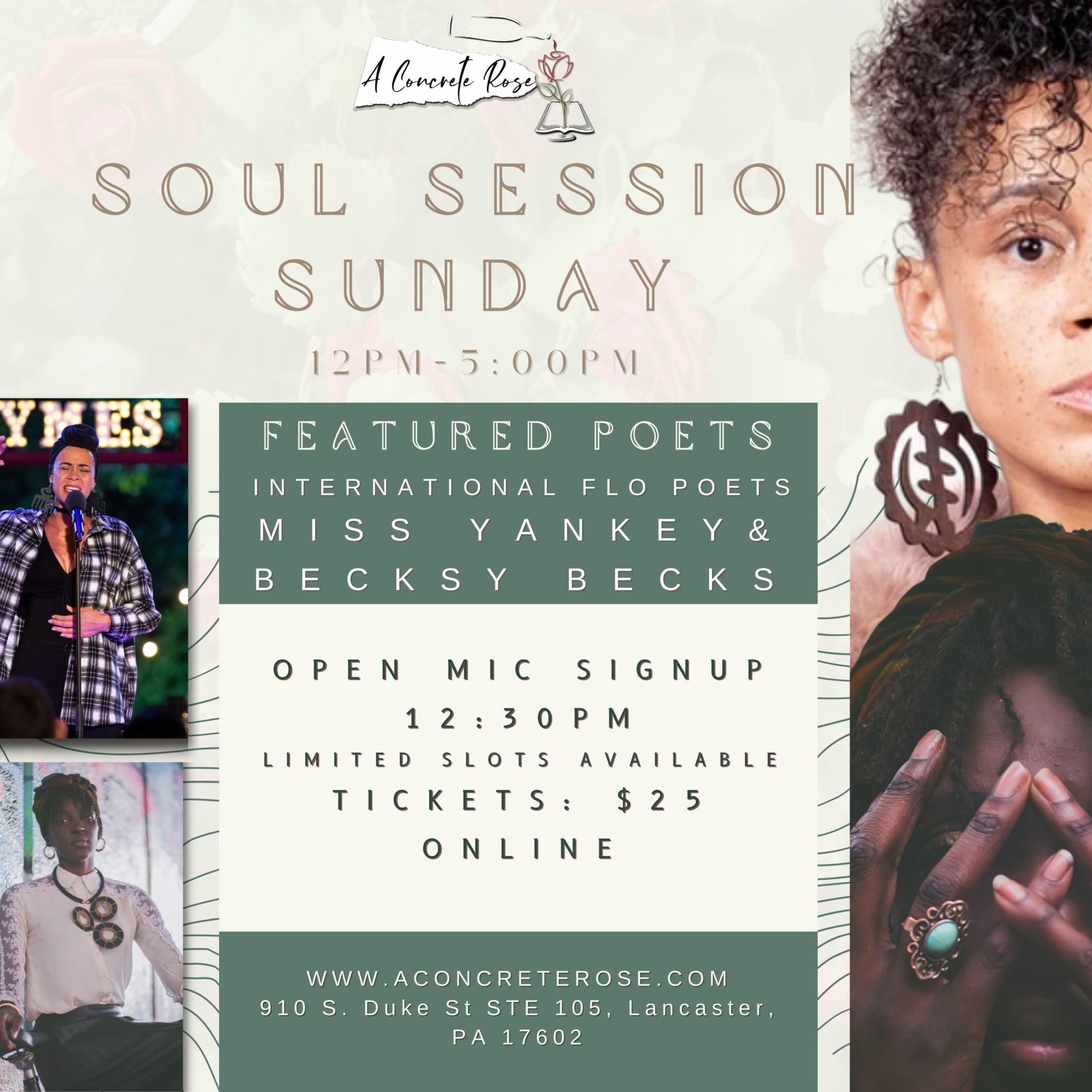 Soul Session Sunday is an open mic and spoken word show at A Concrete Rose Bookbar Co! Our featured poets are coming from London, UK with an amazing set of excellent delivery of soul striking spoken word and a live writing session with attendees.

Spoken word open mic sign ups open at 12:30pm. There are 10 slots available so get there early! Open mic poets must sign themselves up. You cannot sign up for someone else.

Attire: Dress in a way that makes you feel good 🙂

About our featured poets:

Miss Yankey
British/Ghanaian Writer, Activist, and Spoken Word artist Miss Yankey has captivated audiences from London to Paris, to New York, to Accra, and as far as Melbourne becoming a X4 Slam Champion along the way. Her energy is unmistakable, every word she spills is carefully crafted, performed with passion, and loaded with authenticity. An unapologetic advocate for women’s rights, mental health, and domestic violence awareness, Miss Yankey is determined to use poetry to positively impact the lives of others.

Miss Yankey recently made her television debut on BAFTA Award winning ‘Life & Rhymes’, alongside solo and collaborative Spoken Word Theatre performances at Sadler’s Wells for Breakin’ Convention, and the Criterion Theatre for PUNCHED directed by Jude Kelly. An accomplished poet, she has taken to the stage at a variety of events to include Tramlines, Lambeth Country Show, Field Day, Neverworld, Edinburgh Fringe, Kind Fest, and The Vagina Festival.

Becksy Becks
Becksy Becks is a South Sudanese FLO poet, event host and Slam Poetry Finalist. Driven by her three life pillars of Laughter, Love and Literature, her writing explores a variety of personal life experiences, which she delivers in a relaxed, relatable, conversational style, often exploring the dichotomy between humour and tragedy.
To best describe Becksy Becks would be to call her a Poet by Purpose, Dancer by Daydream and awesome by everything else. She curated Bedroom Poetry in 2018, recognising it as a safe space and a portal for her imagination to escape and merge with her reality.