FREE PERFORMANCE: “Live from the Red Rose” and 3 ART EXHIBITS 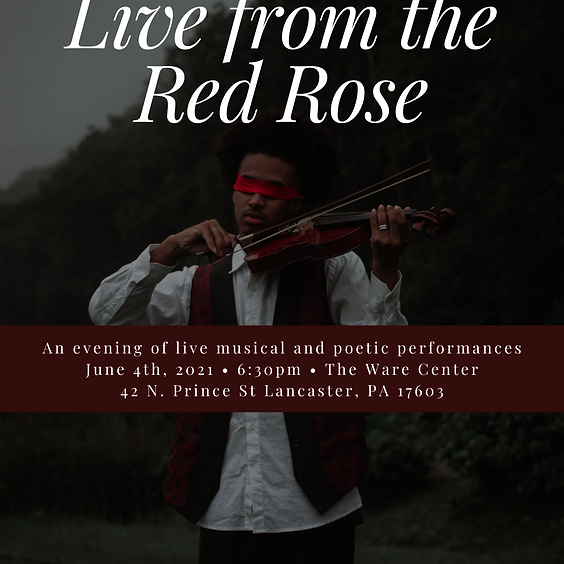 At the Ware Center
LIVE FROM THE RED ROSE is an evening showcase of live art, music, dance, and poetry hosted in the heart of downtown Lancaster from local talent and more. It intersects creativity and community in celebration of the city, its people, and all that passes through. Curated by Evita Colon.

The evening also showcases three new art exhibits! Opening in the Lyet Lobby from 6-8 P.M. is Brandon Malone: DJ’s SAMPLING & MC’S RAMBLING, featuring the photographer and graphic artist’s street portraiture of two favorite subjects: musicians and skateboarders. Also opening in the lobby is Gracie Berry: SHADOWKEEPERS & ROOTHEALERS “THE ORIGINAL OG’S”, an homage and Afro-futurist altar to the Original Orisha God’s from the Yoruba culture of west Afrika including ancestors that have radically nourished, transformed and sustained the lives of the Afrikan Diaspora throughout the world.

In the Regitz Gallery, Lancaster Summer Arts Festival presents EXPANDED VISIONS, the annual, juried exhibition that embraces all forms of photography from the traditional darkroom to the digital image. The exhibition will present works by the region’s most talented photographers.